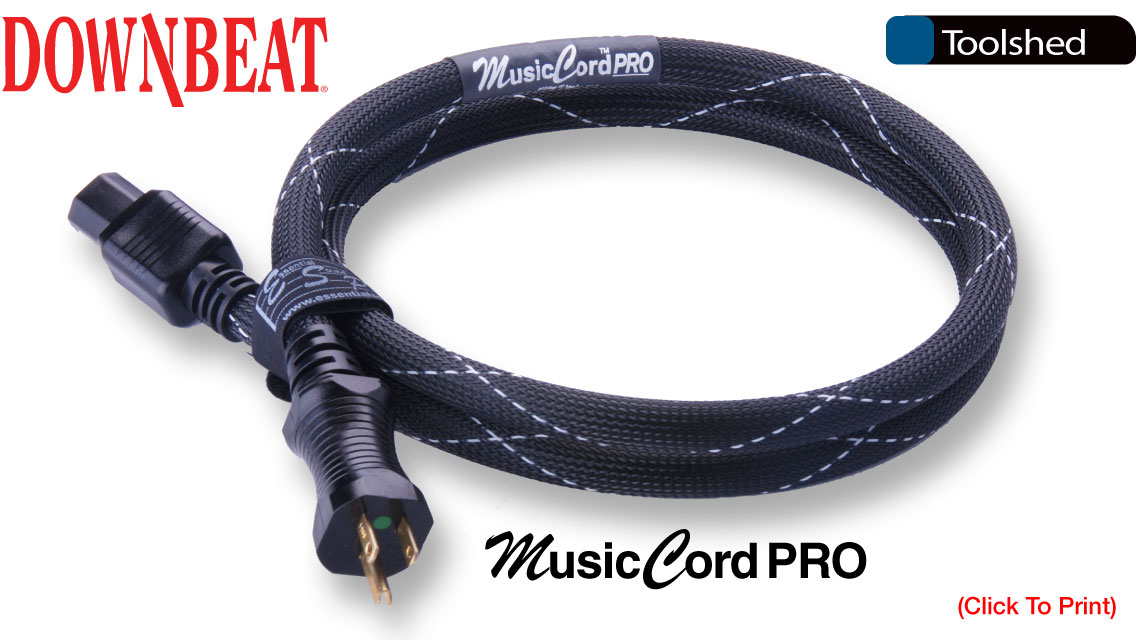 The difference in sound quality was amazing. There was an increase in clarity, with cleaner highs and tighter bass notes.

Musicians constantly search for new ways to improve their sound and get the most out of their equipment, using everything from cus-tom-made instrument cables, hand-wound pickups, cryogenically frozen strings, expensive picks and a host of costly outboard gear. With all this care and effort, it seems strange that musicians never consider the influence of the cheap $2.99 power cables that run it all. According to Michael Griffin, president of Essential Sound Products, the power cable plays a significant role in amplified tone, and he can prove it.

High-end audio cables have been around for nearly 20 years and are popular in the audiophile world. Monster Cable was one of the first companies to offer these products to the public. The theory is simple: a better sig-nal path between components will increase the audio quality of a system. For musicians, high-quality instrument and microphone cables have become widely accepted prod-ucts in the market.

An audiophile and avid jazz fan, Griffin became aware of the influence of power cables on audio quality after a friend let him try an after-market cable on his tube pre-amp. "I noticed an immediate change in the sound of my system," Griffin said. "Surprised by this, I began to look into the possibilities of developing a power cable specifically optimized for improving audio quality."

Griffin was an engineer at General Motors at the time, and began to develop his first product, the Essence power cord, which was released to the audiophile market in 1995.

Looking for other market applications for his product, he began to think about potential musical applications, leading him to develop the MusicCord and MusicCord-PRO power cords.

People can be skeptical that a power cord can really impact the sound of their gear. According to Griffin, every cable has specific impedance and will color the sound of the device to which it is connected. "I designed the MusicCord series to be completely trans-parent-to not add any color at all-allowing your equipment to deliver at its full potential," Griffin said.

The MusicCord accomplishes this by filtering out phase distortion, which can result in a lack of clarity, and by delivering a faster and more consistent flow of AC power to the device as compared to a standard inexpensive power cable. The technical argument is con-vincing, and Essential Sound Products has plenty of data to back up its claims. Plus, it is really music to your ears.

To test the cord, I played two guitars, a solid-body electric and an amplified hollow-body jazz guitar, both through a boutique tube amp and a solid-state jazz amp. As recommended by the company, I began with the standard 18-gauge power cords that come with most equipment. After listening carefully to the sound, I switched to a heavy-duty 14-gauge cord and played the same passages on the instrument. Surprisingly, there was a distinct difference in the sound of the amps using the heavier power cord. The notes were significantly clearer and the amps ran quieter.

With confirmation that power cords do make a difference, I then switched to the MusicCord-PRO. The difference in sound quality was amazing. There was an increase in clarity, with cleaner highs and tighter bass notes. Both amps also sounded warmer and fatter. Although the results were consistent on both guitars and amps, I noticed that the tube amp received a slightly more significant quality boost as compared to the solid state. This is an indication that the inexpensive power cord has been more of a limiting factor on this amp as opposed to the solid state. According to Griffin, this increase in quality is the amp performing at its maximum potential for the first time.

With such a groundbreaking product, it's no surprise that musicians are starting to take notice and use the product. Artists such as guitarist Henry Johnson and bassist Victor Wooten are among MusicCord's endorsers. Johnson tried the cord and was immediately sold. "I have been playing guitar for more than 30 years, and I felt I knew everything about guitar amps," Chicago-based Johnson said. "But I was shocked to hear the difference in tone from my JazzKat amp using the MusicCord-PRO power cord. There was more volume and the guitar was noticeably cleaner."

It is always exciting to experience something innovative. Listing at $199.99 (July 2012), the Essential Sound Products MusicCord-PRO is a revolutionary product that will make your instrument amps, microphone preamps, PA and outboard gear sound significantly better.
- Keith Baumann

Originally printed in the Janaury 2009 issue of DOWNBEAT magazine.