IT'S AN INSTRUMENT, you know. In the dimmed light we look out to the warming pieces of our stereo and ask, as countless times before: What change now? The process can be a conundrum; a method tempting Chaos. Equally intriguing is the notion that each piece of our system is, in essence, a subjective reflection of its inventor's mind, of his sight of the sound absolute (or lack thereof). We see that a stereo piece is mearly a means-a tool-towards the conveyance of that vision.

In creating our own instruments our stereos -- we conjure these various visions into our own. It is a balancing of visions, and the stereo components, be they metal or ebony, are simply umbilicals reaching between minds. From minds into visions, into tools, into sound, and then into ours; such is the art, or art-lessness, of hewing a stereo instrument.

And the most obvious umbilicals, you ask? Frankly, while interconnects fascinate, power cords have left me considerably, and consistently, underwhelmed. As a wellheeled automaton, I too have conformed to the path provided: from Distech Powerbridge II's to Tiffany blacks, Discovery then BS (the early ones), and now a reluctant holding pattern with Marigo References. But the self-denied truth is that they have all been names, simply doing the same. Sure, I have heard improvements: a cleansing of both source and space, initially refreshing in its briskness and stripping of irritating grunge, yet with a subtle, obtusely-perceived sterility discerned in long-term listening (albeit longer with each iteration). I have found this trade-off inherent in all powerline products, excepting the Electraclear EAU-l faux-clock box, and, through time, have reluctantly accepted this predictable evolution of product type. Looking out to the instrument, I have always known that my connecting cords were, ironically, a limiting connection between visions, clouding my sight, tempting Chaos. 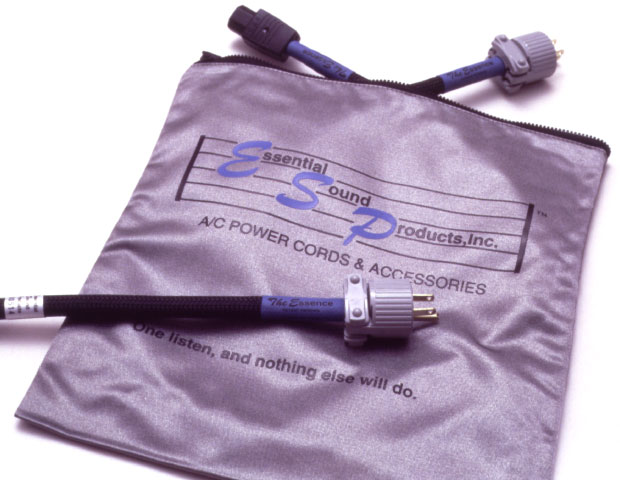 And then came The Essence.
At last, a power cord that can properly be termed
a component.

My first startling perception was that the system had been unleashed through a vital, surging force. And while that observation of dynamic transformation was accurate, it remains a superficial description of the nature of that change, and thereafter, its domino-like effects. The Essence does not drop the noise floor in order to garner increased transient cues (a stripping of space and concurrently the sources' harmonic richness) as other power cords and conditioners do, but rather, each source is now (and don't ask me how) individually injected with a high-octane, jet-like infusion of pure energy. Moreover, this change is truly neutral in that no other attribute of the sources' tonal character or behavior, nor the spatial perspective, is detrimentally effected. some components enliven the surrounding space (the Atma-sphere MP-l preamp comes to mind), The Essence seems to enliven the players themselves while leaving your stereo's long-fought-for spatial attributes unscathed.

This past month, I've attended a string of choral presentations, mostly in churches, and have realized that during the soprano's high, dynamic projections, and also during sustained notes (regardless of dynamic force), the sound is not "thrown out" as if from a resonant orb (as I've mistakenly described before), but rather, seems to move out within a narrowed column of projected sonic energy (narrower the higher the frequency) that connects between myself and the singer (for a lesser time period on dynamic bursts and for a lingering, hypnotic period when a note is held and drawn out-i.e., dynamic connection is sustained on sustained notes). This is the semblance of effect The Essence's increased energy bestows upon a system.

The Essence also seemed to enhance the illusion of depth. I say "seemed" because, again, the spatial proportions are not altered,but, rather, the deep-stage players are released in an enlivened projection that imbues a wholly natural increase in articulation to their voices.

In other words, depth perspective is not manipulated by a softening of rear-stage sources, but rather through an increased, intrinsic energy within the performers themselves, your connection to their message is enhanced, and thereby, your connection to the depth of space in which they occupy is enhanced. (Articulation, or intelligibility, is also increased for near-stage performers, although this is an effect readily adjusted through other means.)

One final observation (and, alas, there are others): My Quads have never even remotely approached this level of dynamic performance, and, frankly, I'm still a little nervous about the system's capabilities. The air vents in the ceiling now vibrate from the totally transformed and exquisitely tight low-octave energies. I leap instinctively to punch the Down button on the Joule's remote volume control-yet the Quads blow past my furtive actions unfazed! I know these speakers intimately and have long ago accepted their supposed Iimitations, but now am forced to reassess the nature of their limitations. I see that it is the purity of bass energy they are fed which is important to their ultimate performance. Gone is the urge to burden my short-path system with a subwoofer and cheesy crossover simply to balance the spectrum.

One caveat: While The Essence is un-editorializing, it does expose latent, discontinuous artifacts in upstream components, particularly those of an analytic persuasion. Frankly, I am thrilled for a light to be shown down the path ahead (what change next?), but if you own a solidstate system, digitally-based with an analytic bias, and you wish to ignore this trait, I don't believe The Essense will allow you. On the upside, if you own a system that you feel is approaching its apex, then you must, simply must, audition this product.

So, again, that question: What change now? I say: Go on, get connected; stoke the obsession, and distill the Vision ....